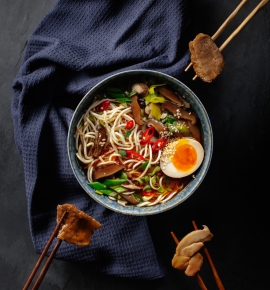 Ramen is a Japanese soup made with noodles. Its broth has several different flavors. Some broths are salty while others are sweet. A popular broth is Shio tare, which is clear and often paired with vegetables and chicken. A second broth is shoyu tare, which is flavored with Soy Sauce. Whether you order the latter or the former is up to you.

In Japan, ramen is usually served in tiny ramen ya (noodle shops) with counter seating. These establishments often use a ticket system to collect payment. You purchase a ticket at the entrance and give it to the staff behind the counter. This helps the staff save time by avoiding the need to handle cash. These ramen restaurants typically have just one or two staff.

The soup itself is made of pork bones, which are boiled to a thick, meaty broth. Its consistency is similar to that of a gravy or milk. However, this broth can vary from region to region, as well as shop to shop. Some ramen ya use chicken, beef, fish, or even a combination of all of these ingredients. In addition to the broth itself, you may find a few other ingredients in ramen, such as seaweed or bamboo shoots.

Another popular addition to ramen is the miso paste, which is often mixed into the broth for an intense savoury flavor. The paste turns the broth opaque and helps the noodles have a more pronounced flavour. Some chefs also add tonkotsu and lard to their ramen broth.

Ramen is often enhanced by a condiment known as rayu, which is a spicy sesame oil. This condiment is an excellent accent to ramen and works especially well with tantan-men. Many Asian markets sell small bottles of rayu. If you want to add more heat to your ramen broth, try combining it with a splash of chili oil.